I think we’re about ready for some primer. But first: more bog.

There are a whole bunch of little dents on the inside, as expected in a 50 year old car with lots of exposed metal. When the car was stripped back they looked fairly minor, but now it’s all the same colour they’re pretty noticeable- and will only look worse when it’s shiny. Sin’s going to fill the worst offenders (crossmember, companion pockets, and dashboard) before priming the whole shell.

Finally it’s time for primer. We’re going for a dark grey on most of the shell, and white on the roof- the theory being that stone chips will be less obvious. 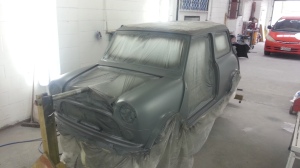 It’s starting to look like a real car already! And, while primer is notoriously flattering, the panels actually look pretty straight. 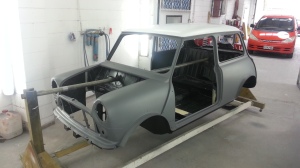