This is the first time we’ve seen the new upholstery in the car, and it looks really good! Here’s Brian installing the driver’s seat:

And comfortable too- though it appears we might have ordered new seatbelts which are too short. They reach when the seat’s all the way back (which is a good driving position), but move the seats forwards and they get a bit tight. New seat belts ordered from Seatbelt Planet. 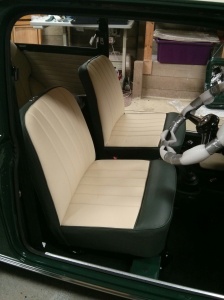 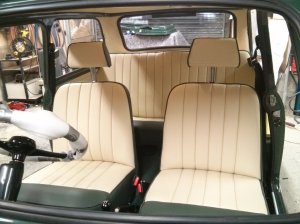 The headrests aren’t original for 1963- the seat frames are out of a later Mini- but since we’re both too old for whiplash we made a couple of concessions to safety. Besides, the head rests are removable if we want to go back to the standard look: